Presense 预感知
Igor Sladoljev, Sveta Gorlatova, Gleb Papyshev, Artem Nikitin
Presense is a machine learning prediction platform prototype. Trained on users activity in his/her environment it can produce predictions of a user’s future behavior, not just in one, but multiple urban environments in parallel. Acting as a “refractive lens” between the user-citizen and their native city, Presense creates personalized predictive model we call “the predicted self” – a quantified entity which can be copied and deployed as “synthetic replicas” in any number of foreign cities. By learning from users’ unique urban signature and interacting with a range of contexts, Presense grants the user insight into the lives he or she might be living elsewhere – the experience previously unattainable. We imagine this would lead to, what we call, “a social multiverse of the self”. Since users can’t influence their “synthetic replicas” other than by adjusting their own patterns of behavior and observing the gradual change of machine re-learning the question of “who is training who” becomes apparent. This phenomenon of continuous negotiation between us and “predicted” us we call “the predictive self-sensing”.
In the age of ubiquitous data mining, we want to look at the benefits and hazards of predictive models as they operate at present but also speculate on how they might evolve with a special interest in how it impacts the urban environment. Coming to terms with the fact that whatever we choose to do is only retraining the machine learning algorithms to make a more accurate model of us is a phenomenon that deserves a global pause and a buzzword as big as climate change. The existential change running silently in parallel is relevant to our idea of the self, as arguably the most prized resource is no longer fossil fuel but us, or rather, our data. Because of this, it seems it is not the technology but the human being that must adapt.
As an expanded urban design practice, Presense investigates the intersections of urban planning and synthetic modelling looking for a new understanding of the scale, we, until recently, found useful to call human. In challenging the technology we are building by envisioning its ‘side effects’ we find cinematic language to be the most communicative. For ‘Eyes of the City’ we would like to present several such narratives. 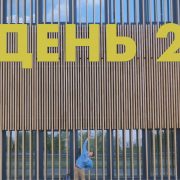 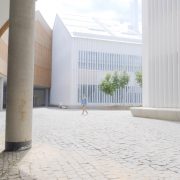 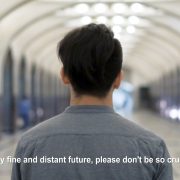 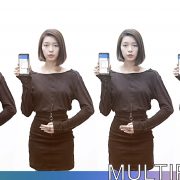 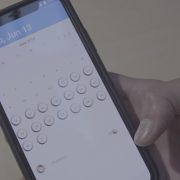 Shanzhai sonata is a cinematic meditation on the post-work economy emerging in Shenzhen, as people worldwide begin to rely on their digital twins for economic gains, turning their behavioural data into profit. These early adopters came to be known as data trainers.

Drawing both fact and fiction from the Shenzhen’s native notion – shanzhai, as a way of addressing the ‘value’ of a copy we also consider the city of Shenzhen, an unprecedented phenomenon of urban and economic growth, an outcome intertwined with that very same ideal. Set in the imminent future, the film narrates one story occurring in parallel in Shenzhen, Amsterdam and Moscow as three separate narrative movements of a single sonata. What holds them together is the story’s protagonist investigating a data monetization phenomenon made possible through a new digital platform called Presense. Presense is also a title of a wider research project investigating the impact of data centered technologies ie. prediction algorithms and digital twins on the urban environment and in particular on the human scale. The project was originally developed at Strelka Institute of Media, Architecture and Design by Igor Sladoljev, Gleb Papyshev, Sveta Gorlatova and Artem Nikitin in 2019.